On 21 June, The SEO world received a bit of a shock during a pre-conference workshop at SMX Advanced Local Workshop in Seattle. Ali Turhan, Google’s Global Product Lead for Local Ads revealed a screen shot of a smart phone search result displaying a local 3-pack with a paid ad placed above the two remaining organic listings. During the Q&A which followed, Turhan revealed that Google was still in a testing phase regarding this issue and that the final outcome might differ from what he had just revealed to his stunned audience.

Needless to say, this is a major development for local search engine marketers, especially those dependent upon mobile search. The available real estate open to local organic listings is a fiercely contested space to begin with. Reducing that by 33% and opening up the top slot to the highest bidder would affect the field of play considerably. If the proposed new policy were to cross over to desktop local search as well, then we would truly have a paradigm shifting event on our hands.

Beginning with last month’s Google Performance Summit in San Francisco, it has become clear that  Google has decided to treat mobile, tablet and desktop paid and organic search results as distinct user experiences. They unveiled a raft of major and minor alterations to Adwords listings and platform bidding and targeting features to be rolled out over the coming year. The same can be said for organic SERPS and the Analytics platform diagnostics and reporting features.

At time of writing, the local 3-pack with one (or perhaps more one day??) ad has not been seen in the real world yet. As this 'leak' came from Google itself however, it would appear to be only a matter of time before it at least begins to show up in split testing results like the disappearing Adwords right side bar did a few months back. We will keep you informed as the situation develops.

Below is a screen shot of a typical Local 3-Pack Organic Search result as they currently appear. Below that is our mock-up of a mobile 3-Pack with an ad as it appeared at SMX Advanced Local Workshop in Seattle. 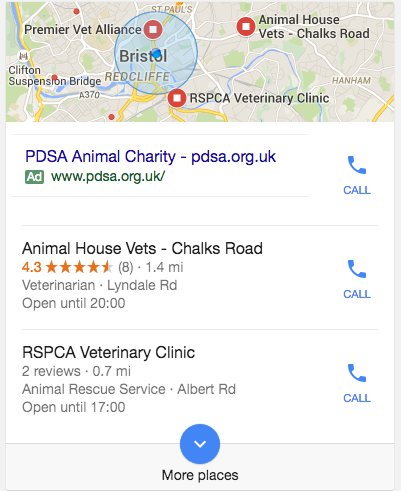